How did you start working with YachtShare?

I arrived from the UK in 2002 and rather than buy a yacht outright, in a new country, I did some research and found Yachtshare. I was a client for 2 years.  Life got busy after buying an inflatable boat business so sailing had to take a back seat.

In a roll reversal, YachtShare became a client of my business.

Around 2014 I heard that YachtShare were looking for a qualified skipper to carry out assessments for potential new clients so I applied and here I am today.

When did you start yachting and who was your inspiration?

As a small child living in Portsmouth, UK, in the late ’60’s I had the honour and pleasure of meeting Sir Robin Knox-Johnson just after he became the 1st person to sail around the world single-handed.  I was completely mesmerised by him and the boat.  Soon after meeting him I joined the school sailing club based on the shores of the Solent and have been messing around in boats ever since, just not so athletically!

My father was also a 21 year veteran of the Royal Navy so you could say I have a sprinkling of saltwater running through my veins!

You are an active coastguard volunteer.  Tell us about your role?

I joined Coastguard North Shore, Browns Bay, in 2004 as a new recruit volunteer.  Because of my boating background and after a few years of “Coastguard” boating experience I was lucky enough to be put forward for Search & Rescue skipper training. I became a fully-fledged SAR Skipper in 2008 and have over 2,000hrs logged since, saving lives at sea.

Part of the responsibility as a skipper is to pass on my knowledge to those down the ranks and to mentor future SAR skippers.  I get immense pleasure seeing those guys grow and progress through the Coastguard system to one day take charge of the own boat and crew.

You used to have an inflatable boat business.  Tell us more?

In 2008 my accountant told me about this inflatable boat business that he knew of that was for sale.  We ended up buying it.

When I purchased the business, the boats were made in China.  After a few years I thought “wouldn’t it be great if we could make these boats here in NZ?”.  So I had moulds made locally for the full range boats I sold and a local company made the hulls.  I already had a couple of employees who could make the inflatable tubes so we were all set to go.  Made in NZ was a good point of difference and things got busy.

We were so successful at making the tubes we were contracted by a well known Kiwi company selling their boats worldwide to manufacture the tubes for their boats ranging from 6.5m to 12m.

As much as I loved owning the business, after 9 years it was time to sell and get back to doing what I enjoy most and that was to be on the water.

When you are not bobbing around on boats, what else do you enjoy doing?

My wife and I love to holidaying in motorhomes.

We have owned several over the years and rented a few in Australia, US & Europe.

It’s a great way to see the sights. 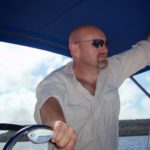